Hatch has an amazing versioning cli for python packages that just works. It takes very little config to get going and you can start bumping versions without worry. 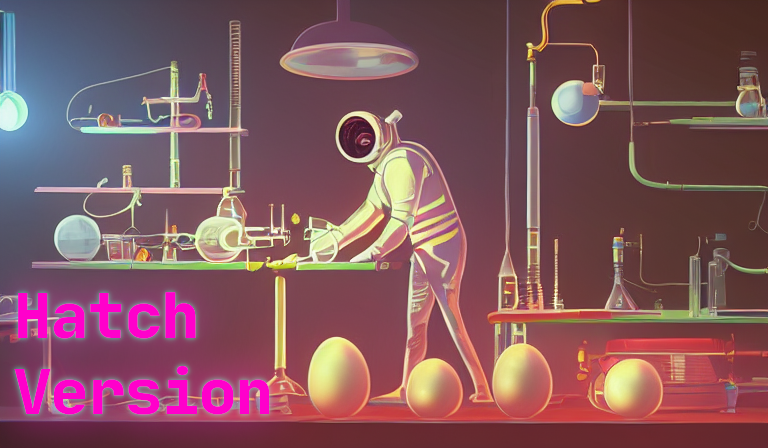 creating new versions created by myself with stable diffusion

For trying out the hatch version cli let's make a simple project with the terrible name pkg.

The main hero of this post is the pyproject.toml. This is what defines all of our PEP 517 style project setup.

It is possible to set the version number inside the pyproject.toml statically. This is fine if you just want to version your package manually, and not through the hatch cli.

Statically versioning in pyproject.toml will not work with hatch version

Setting the project verion dynamically can be done by changing up the following to your pyproject.toml. Hatch only accepts a path to store your version. If you need to reference it elsewhere in your project you can grab it from the package metadata for that file. I would not put anything else that could possibly clash with the version, as you might accidently change both things.

If you really need to set it in more places use a package like bump2version.

Note: you can configure hatch to use a different pattern https://hatch.pypa.io/1.2/version/#configuration, but I have not found it to be something that I need.

The hatch project itself uses a about.py to store it's version. It's sole content is a single __version__ variable. I don't have any personal issues with this so I am going to be following this in my projects that use hatch.

Hatch has a pretty intuitive versioning api. hatch version gives you the version. If you pass in a version like hatch version "0.0.1" it will set it to that version as long as it is in the future, otherwise it will error.

You can bump parts of the semver version.

Here is a screenshot of bumping a projet along. In my github actions flow I will be utilizing this to automate my versions. In my side projects I use the develop branch to release --pre releases. I have all of my own dependent projets running on these --pre releases, this allows me to cut myself in my own projects before anyone else. Then on main I automatically release this beta version.

Here is what the ci/cd for markata looks like. There might be a better workflow strategy, but I use a single github actions workflow and cut branches to release --pre releases and full release. These steps will bump, tag, commit, and deploy for me.

I am setting up a github custom action waylonwalker/hatch-version-action that will lint, test, bump, and publish for me in one step. More on that in the future.